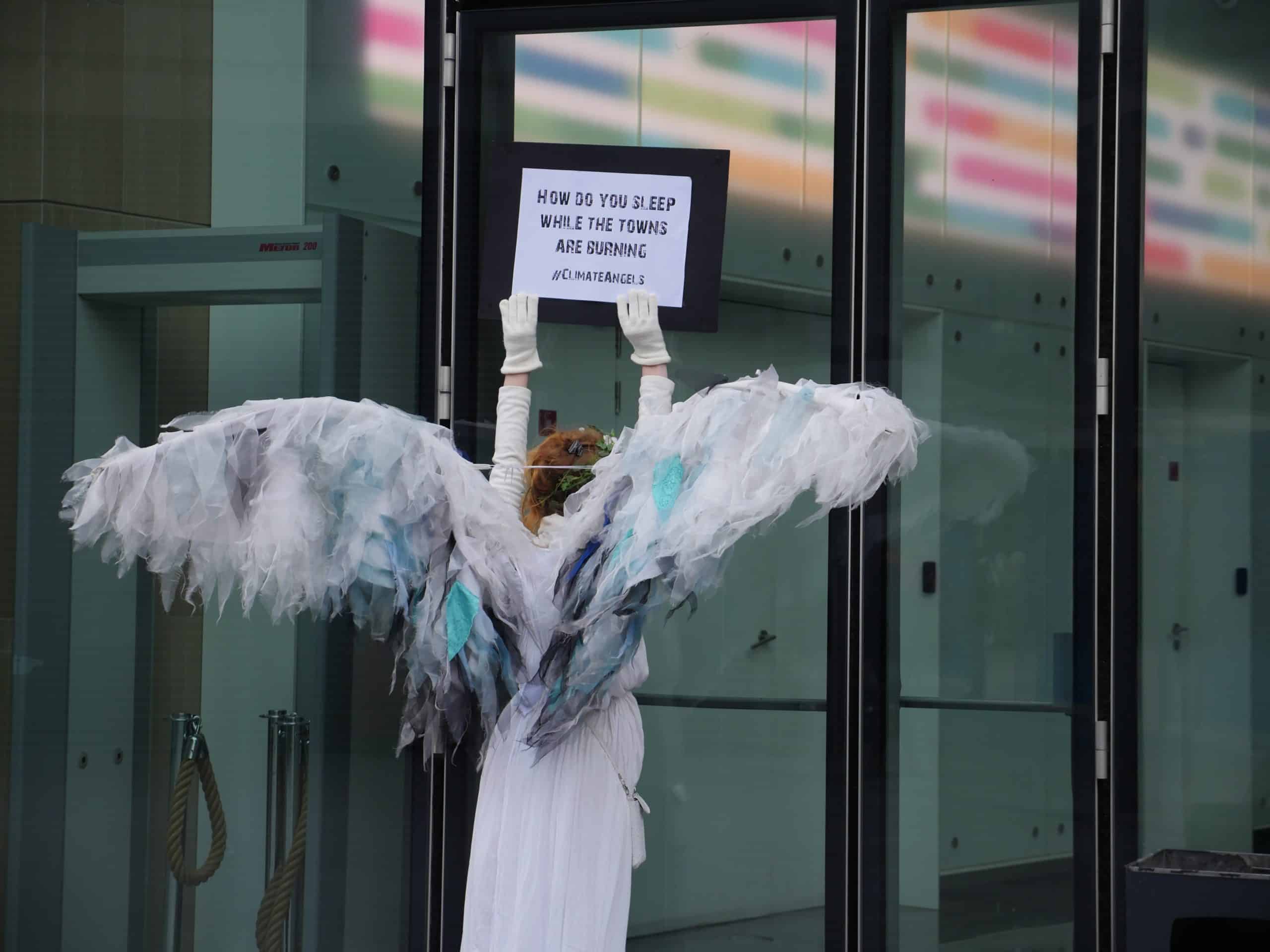 A flock of Climate Guardian Angels from Australia descended on Engie’s head office in Paris to decry the corporation’s appalling treatment of Victoria’s Latrobe Valley community and their environment.

A flock of Climate Guardian Angels descended on Engie’s head office to call the transnational energy corporation to account for its reckless and self-serving approach to business in Victoria, Australia.

“Public Inquiries into the Hazelwood Mine fire (February 2014) that blanketed the Latrobe Valley community in toxic fumes and ash have found that Engie’s poor management contributed to deaths and other adverse health affects,” said Deborah Hart, co-founder of ClimActs.

“To add insult to injury, after 7,000 volunteer firefighters with the Country Fire Authority spent 45 days battling the fire, Engie refused to pay expenses amounting to $18 million. Acknowledging that the real costs of the inferno won’t be clear for a long time to come, we’re here to collect the money owed to Victorian taxpayers.”

“Engie is sponsoring COP21 while running some of the dirtiest coal fired power stations in the world. Their lobbyists are crawling the corridors of power here in Paris. This corporation has blood on its hands from deaths caused by willful negligence. Meanwhile, it’s spent $250million on lobbying the French government to reduce emissions targets, while refusing to pay the $18million owed to the Victorian community for cleaning up the Hazelwood mine fire disaster. Engie is more than hypocritical, it’s criminal.”

The Climate Guardians peacefully dispersed after two and a half hours of blockading the entrance at Engie’s global headquarters in Paris. “Engie’s refusal to accept responsibility is corporate negligence and indifference at its most cynical, self-serving and coldhearted. We will continue to obstruct their business-as-usual model by putting our bodies in the way with peaceful direct action. They have not seen the back of the Climate Guardians’.

ClimActs’ Climate Guardian Angels (and Coal Diggers) are in Paris for COP21. “We are here to represent the majority of Australians who want locally owned and controlled renewable energy. Unlike our delegation, most Australians don’t want their beautiful country turned in to a giant quarry to pollute the world,” said Hart.