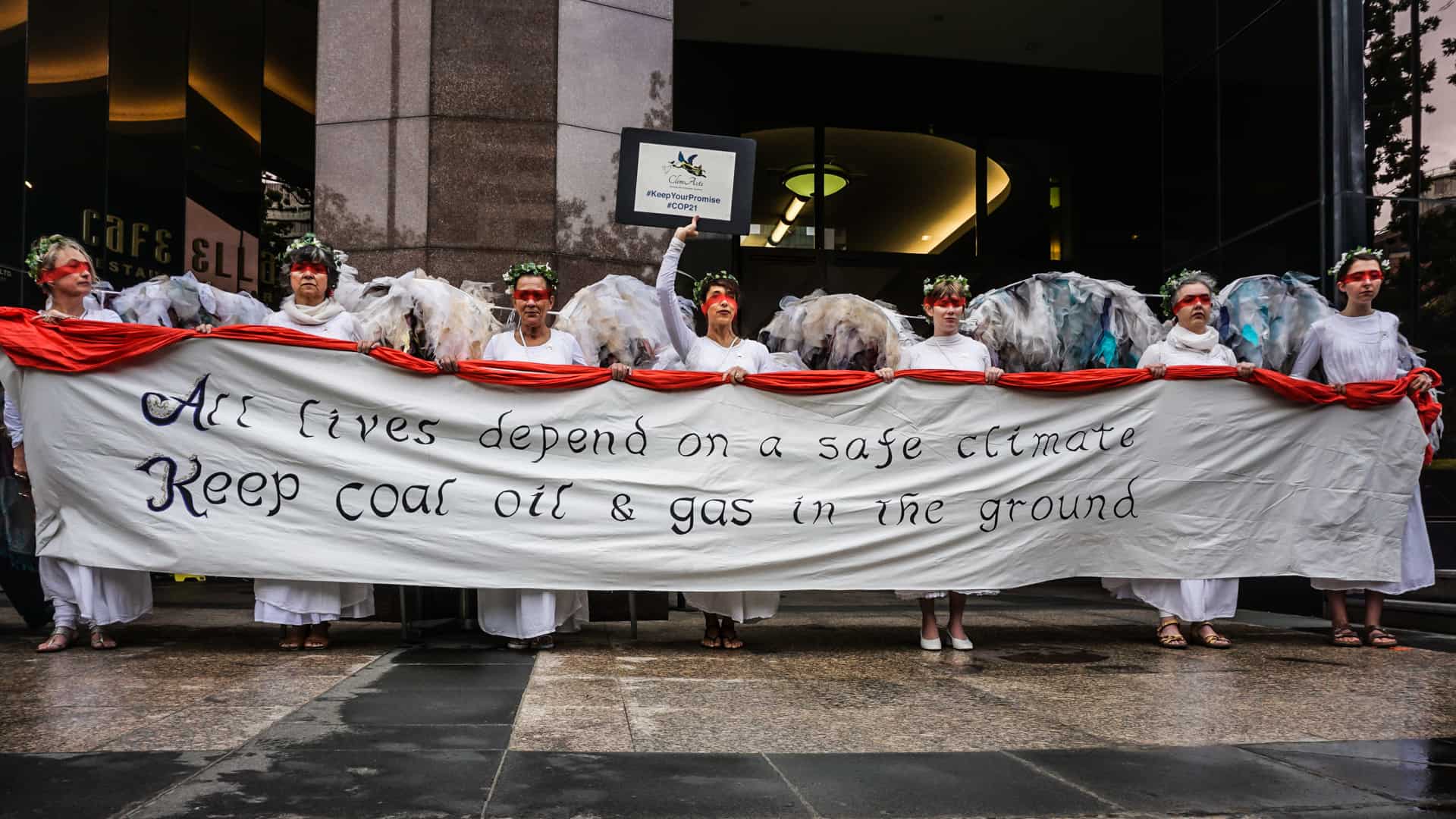 As the new US Republican Administration’s assaults on human rights and environmental protections continue to mount, they’re being met with ongoing and unprecedented demonstrations of determined resistance. Last monday’s ‘Presidents Day’ 2017 (20th February) saw further mass protests with thousands of people in 28 cities across the US taking to the streets, rallying against Donald Trump under the banner of ‘Not My President’

In support of those standing up against the neoliberal Republican agenda, Climate Guardians descended on the US Consulate in Melbourne early on Monday 20th February to demand urgent action to address the global climate emergency and decry the apparent hijacking of US politics by the fossil fuel industry.

The Climate Guardians ‘visitation’ followed the anticipated confirmation of Scott Pruitt as head of the US Environmental Protection Agency (EPA), despite him having built his career leading law suits against the EPA’s meagre environment protection laws. Pruitt’s confirmation was rushed through after an Oklahoma judge ordered that emails from a January 2015 open records request be released. The subsequently released documents from the Oklahoma attorney general’s office include more than 7,500 emails and other records exposing Pruitt’s extremely close ties with fossil fuel interests, including the billionaire Koch brothers. And then came the Whitehouse press briefing lock-out of journalists from the Guardian, New York Times, CNN, and Buzzfeed whose reporting of facts doesn’t suit the new US Republican administration’s agenda. No alternative facts can be found to deny that these are the well-oiled tactics of authoritarian dictators.

In the words of New York attorney general Eric Schneiderman, ‘Personnel is policy, [Trump] is putting in place people that really are at odds—and in some case fundamentally at odds with the purposes of their agencies’. Like former ExxonMobil CEO Rex Tillerson (who was appointed as Secretary of State), Pruitt is a career fossil fuel advocate whose highly paid job demands that he aggressively deny climate change. However, the fact that US solar and wind industries are each creating jobs at a rate twelve times faster than the rest of the economy suggests that fossil fuels are already losing the war.

The Climate Guardians were later joined by dozens of activists from the Victorian Climate Action Network who are driving calls for a Climate Emergency Declaration, many of whom had come directly from the Melbourne launch of the national #StopAdani campaign. Led by the Australian Youth Climate Coalition and 350 Australia, a series of actions were held outside Westpac offices in Melbourne, Sydney, Canberra, and Brisbane, calling on the bank to rule out funding Adani’s proposed megamine.

Meanwhile, this week the Andrews Victorian government succeeded in passing amendments to the Victorian Climate Change Act that enshrine a zero-net emissions target by 2050 into law, require governments to set five-yearly interim emissions reduction targets and implement adaptation action plans. In addition to cleaning up our air and water and making our electricity system more resilient, transitioning to smart and secure (battery backed) renewable zero pollution energy systems will create thousands of new jobs and billions of dollars in investment in local communities and economies.

The fossil fuel industry has known this for a long time. This is not a new drama. The craven hijacking of democratic systems by entrenched vested interests seeking to maintain their power, suggests that the credits are starting to roll. People power will prevail.