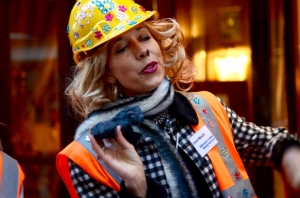 So Bébes here we are in Paris during COP21 co-hosting the Heartland Institute’s conference to convince leaders (ok, investors) that 97% of scientists are simply wrong about global worming. “All you really need to know is that ‘coal is good for humanity”, said Coral Bleach to the stunned paparazzi! 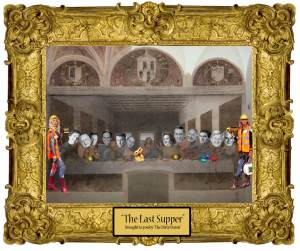 Here we are with our effluent friends – “The Dirty Dozen”- proudly bringing “The Last Supper” to you, and all beloved creatures great and small.

Special thanks to that deviant Green Clive Hamilton for bringing all this attention to our power and glory – you know we deserve it!

ps have some holiday fun spotting your fav polluter!

Disclaimer: if you’re thinking of suing us, don’t forget that we Billionaire miners own you) 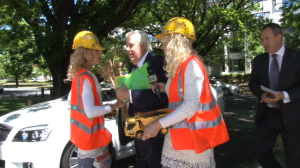 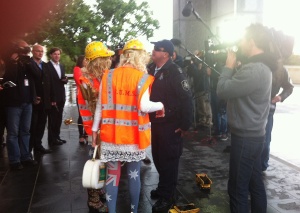 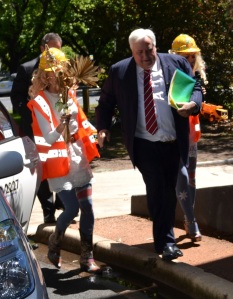 Photo 1) Thank you Ladies & Gentleman of the 4th Estate (aka media) but you are no longer needed because from now on we will conduct our own press conferences without your pesky questions about departmental spending, weddings, wikipedia and carbon emissions (photo taken at House of Representatives MP entrance, Australian Parliament House)

Photo 2) Clive, Clive, don’t you remember us from that special night at the Diggers & Dealers Ball, when we drafted our billionaire miners’ self-welfare-ing legislation (aka carbon great big tax on everything repeal legislation with Tony and Greg? (thought bubble: wow Clive, we never knew you were a sprinter! Photo taken outside of the National Press Club, Canberra) 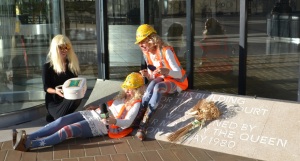 Photo 3) After laying a wreath we celebrate our closure of Australia’s High Court with a little PPP (party-particle-pickusup). It had to be done because the extremist, alarmist elitist greenie deviants were using environment laws to stick green tape all over us and make it take longer for us to trickle our effluence down to the poor poor people. Clearly Hazel got carried away after snorting all that Coke-ing coal – she nearly fell into a sinkhole…people of Australia you really should have been there! (photo taken at the entrance to the Australian High Court, Canberra) 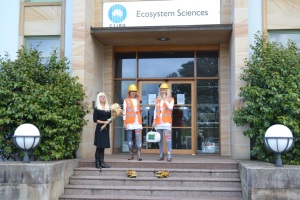 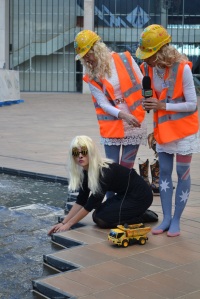 Photo 4) Here we are laying a wreath on the steps of the former CSIRO (aka hotbed of extremist, alarmist elitism). How else was Tony going to find the billions needed to fulfil his election promise to deliver billionaire self-welfare? (photo taken at CSIRO headquarters, Canberra)

Photo 5) Hurry up Carbon Bubbles (aka Ursula, our 24/7-working-457-visa-worker from Ukraine), clean that organi-coal faster! Time is $ and you are holding up our effluence from trickling down to the poor poor people! (photo taken outside the Australian High Court, Canberra)

Naturally Hazel and Coral are wildly enthusiastic about ANZ financing Whitehaven Coal’s Maules Creek project – one of three open pit coal mines proposed for NSW’s Leard State Forest. They can see that the waste from the destruction of thousands of hectares of native habitat, including 500 hectares of critically endangered White Box-Gum woodland, could be turned into revo-lotionary Cachécoal sequinstrating products. Never mind that the mine will operate 24 hours a day, seven days a week, creating significant noise and dust pollution. Or that Whitehaven’s project will permanently scar the landscape, and create a toxic pit hundreds of metres deep that threatens the ground water for many centuries to come.

Like ANZ, the Coal Diggers don’t mind it that Whitehaven submitted false and misleading information in order to secure environmental approvals, and that the Maules Creek community is legally challenging the project.

Like ANZ, the Coal Diggers future profits are threatened by zero pollution energy projects that are emerging. After all how will coal barons make massive profits if renewable wind and solar energy takes over?! Besides ANZ doesn’t appear bothered that funding a highly destructive and deeply unpopular project like Whitehaven Coal’s mine makes a mockery of the Bank’s own social and environment policies and guidelines? see ANZ Corporate Responsibility Guidelines/. And who cares about ANZ’s committment to abide by the Equator Principles anyway? Compliance with Equator Principles Guidelines was after all a commitment of the previous CEO, John MacFarlane. Under current CEO, Mike Smith, principles are for portraying an environmentally concerned public image regardless of the cost to future generations. On’ ya Mick, the Coal Diggers salute you!

Who are the Coal Diggers anyway?

Whether or not global worming is or isn’t ‘absolute crap’ or does or doesn’t have any links to climate variability, the Coal Diggers see an opportunity to become unimaginably effluent as a result of people’s paranoia and real or imagined suffering. Also trading off people’s paranoias around aging, they have designed a range of products, Cachécoal, that sequinstrates the ‘carbons of youth’ directly into the pores, solving the global worming emergency and saving civilization. Hazel and Coral are also Bad-Ass-Country twerkers of the Disco Queen era. They do a sideline dealing in Coke–ing Coal, which is not only legal it’s Govern-Mint subsidized. Being twerking stars, they have their very own signature fashion range; Coal Chic. It’s inspired by their mentor Gina Rhinamine, who loves to dress up as a worker, and is branded B.U.M.S. It features Disco-bling hard hats and appliquéd high-vis vests as their centre-pieces. With Tony and Clive in charge, nothing can hold the Coal Diggers back!

So, what can you do about this?