Travelling back through time using relativity-illusory, global-worm-holing techniques, we are medieval astronomers from the esteemed Flat Earth Institute of the Universitarse of Climatastropharse (est 1033AD). Our delegation of Flat Earthers includes Adjunct Professor Greenhausen, Emeritus Emissionraiseth, Chancellor Carbonaceous and Vice Chancellor Lovecoal. We verily cometh to parliament sittings to bequetheth our great wisdom upon thine noble Aussie Oi Ois of the Liberal COALition. Naturally, we are devoted brethren of the BUMS* conglomerate of interlinkaged peak body think tanks and public policy wonky groups devoted to unlimited substrata profiteering of the Flat Earth.

Indeedeth, you’d thinketh we’d stepped out of the medieval warming period, thanks to our supportive friends at Rose Chong Costumiers!

We acknowledge New Zealand climate activists for inspiring us with an action featuring Medieval Astronomers from The Flat Earth Society. 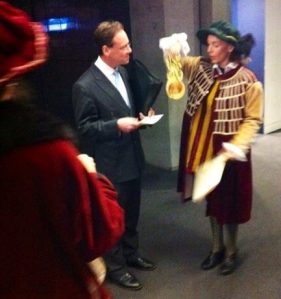 The Flat Earth Institute of the Universitarse of Climatastrophas (est. 1033) confer an honorary BhP on the shadow minister for Climate Change Greg Hunt for his Direct Action Plan

Here we confer on the Honorable Greg Hunt the Convocation Prize for Hot Air Causation after a panel of examiners did duly consider his oral examination in which he expertly defended the thesis titled ‘Non-delivery of an Invisible Substance to No one’. The examiners noted the candidate Hunt had, by the title of his thesis alone, formulated perhaps the most credible statement by the opposition to date and deemed his illiteration worthy of the highest degree conferred by the Universitarse of Apocalyptiarse in Gonzo Doctoring. 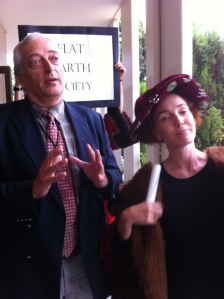 The premature minister Greg Hunt’s Direct Action Plan for a reverse auction of his Grandmother’s carbon abated scones, through revegetation in the tofu substrata of Fukushima, soil carbon sequinstration, capturing gas from the compost behind his back shed, and new energy efficiency regulations over Malcolm Turnbull’s self-abatements will verily mechanate the market directly into floating international policy conventions. The Coalition’s Direct Action plan will doubtless have those renewable energy heretics from the CSIRO, IPCC, NASA, World Bank, International Energy Agency, Price Waterhouse Coopers – and all those other gullible experts who think the world is round – exposed as witches consorting with Satan.

4 thoughts on “The Flat Earth Institute”