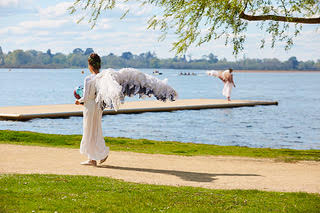 It was a great pleasure and privilege for the Climate Guardians to perform at the inaugural Biennale of Australian Art (BOAA, until 6 Nov) and to contribute to the Art and Activism public discussion last weekend.

The mass of toxic petrochemical waste at the Angel’s feet signifies all fossil fuels and our consumer-driven, take-away economy

Presenting the work of 150 artists, showing more than 1500 artworks across 65 solo exhibitions, the Lakeside Sculpture Walk, The Great Australian Landscape, performance art events, BOAA Dark projects and major street installations, BOAA “tells Australian stories; stories of our past, present and future—reflecting what it means to be Australian today.”

An Angel carries a hand-painted globe by artist Kate Durham, filled with deep red feathers worn by Climate Guardians during the COP21 Red Line action in Paris as the Paris Agreement was being negotiated.

Defying the deeply cynical ‘political’ framing of those unable to defend their anti-social and anti-environment views, the Climate Guardians proudly presented a performance piece challenging all people who are putting the short-term, vested interests of highly destructive, entrenched industries ahead of human rights and a liveable planet.

People choosing careers in industries that pollute, poison and destroy the natural world, as well as undermining the fabric of society, do not belong in leadership positions

By our definition, ‘being political’ is to publicly, non-violently express one’s care for how others in the community, and in communities all around the world, will be impacted by our governments’ policies and by corporations’ actions. It is to meaningfully engage in democratic processes to ensure that our socio-political and economic systems are fair and sustainable, and that leaders with conflicts of interest are held to account. Caring about human rights and justice now and in the future demands that we urgently call for an emergency-scale response to the mounting climate crisis. Failure is not an option.

Performed by Deanne Gilson, a proud Wathaurung woman and artist from Ballarat. Deanne’s art practice deals with the objectification of Aboriginal women by the male colonial gaze and the loss of traditional practices and culture through colonisation.

Deanne is also undertaking a PhD into Aboriginal womens’ business.

Selected from a highly collaborative project driven by Anne Elvey, the Plumwood Mountain Journal’s Hope for Whole: Poets Speak Up to Adani poems were read by poet and academic Dr Ann Vickery with classical guitar accompaniment by Rick Sabbatini.

Recipe for a Giant Pickle by Anne Casey

Extract all carbon in form of coal (approximately 2.3 billion tonnes)

All rights of the Wangan, Jagalingou and Juru indigenous people

120 billion litres of groundwater (if available)

Lake Buchanan, Lake Galilee, Betts Creek, and as many small aquifers of the

Slowly slide sand and soil of:

75,000 square kilometres of the Desert Uplands

(Add Wallum Frogs and Sugar Gliders for colour and sweetness)

(the rarer, the better)

Tip the remaining ingredients in and cover up:

(10,000 jobs should rise out of the mixture to balance acidity)

You can now discard:

The strongly held opinions of 12 million Australians, as well as

While you are waiting, take the 2.3 billion tonnes of carbon reserved earlier, and:

The Sibyl, with frenzied mouth uttering things not to be laughed at, unadorned and unperfumed, yet reaches to a thousand years with her voice by aid of the god – Heraclitus

Our integrated Earth system is a thing of beauty –

the work of algorithms and differential equations.

In the calm of the lab, I sit by a plasma screen observing

Through the laws and logic focussing my mind, I peer into the future.

With a tap on my touchscreen, I look through distant eyes in the sky –

temperatures and melting rates of glaciers and ice sheets.

in a limestone cave, leaving ever more profound impressions.

Often I’m gazing thousands of years into the past,

and cooling. Unforeseen results appear like rays of sunlight

piercing the atrium of a temple; then my mind fledges hypotheses

that rise on thermal currents. I race to track them down,

start the next phase of rigorous assessment. –

When the media publishes my findings, or I report with colleagues

to Congress, there’s always the hope that this time

our work will make a difference. Mostly I feel as if I’m speaking

with addicts on the subject of their habit –

the harm it’s doing them and others, the denial of this truth.

Back home, I well up as my kids play at being adults –

their make-believe shaped by the only world they know.

O, but my angels, the unravelling web …

Net Worth by Dr Ann Vickery

So long Bombay duck, the poles are empty now

What is the kutchi word for sorrow?

Say hello $2.60 a day for a twelve year old to cart water

A wash of cholera, a weep of food, the rewards of cheap energy.

Black milk of daybreak we drink you at night

binding those who know the ground

now ungrounded. How do you coin loss, what keepsake is currency

that burns through generations? We drown in dark pools,

test the depths of a stream with both feet,

snared in the nets by those who can name

a price on everything but the value of nothing.

Thank you Deanne for that beautiful welcome to country. The Climate Guardians acknowledge the Watharung People and pay our respects to elders, past present and emerging. So, to ensure no doubts of our messaging intentions, it is a privilege to be their spokesperson. Please allow us a few points of clarification. The Climate Guardians work is actually designed as activism, to intercept, typically through bold, non-violent direct actions so it’s a welcome challenge for us to stage something where the police don’t arrive.

And this performance was largely a re-enactment of an action we staged in the moat of the National Gallery of Victoria as VIP ‘high level collectors’ were arriving for a private dinner with the Board of directors. Our targets on that occasion were a number of extremely rich and influential people on the NGV’s board and it’s powerful Foundation. These people have long careers in industries that pollute, poison and destroy the natural world. One in particular has also been instrumental in establishing and bankrolling deceptive, tax-exempt industry groups to drive aggressive campaigns that deny science and ultimately undermine the transition to socially and environmentally sustainable alternatives.

Yes, you heard that correctly, they get tax breaks for misleading and deceiving policy makers and the public in order to further enrich themselves regardless of the consequences.

So, that mass of toxic petrochemical, post-consumer waste over there signifies all fossil fuels. Roughly 2000 billion tonnes of greenhouse gas already polluting the Earth’s atmosphere may be invisible, but our oceans and rivers and landscapes are clearly not filling up with plastic all by themselves. The amount of plastic produced in a year now approximates the entire weight of humanity. And as we’ve heard this week, with the release of the latest, Intergovernmental Panel on Climate Change report, scientists are running out of words to describe the urgency of the mounting climate crisis. So, how should we feel knowing that it’s the very same industries responsible for destroying our atmosphere and the future of Every living thing, have invested more than $180bn (that’s so far revealed) in petrochemical manufacturing plants?

Now, just imagine if the efforts poured into trawling the planet in search of more resources to extract, was instead put into further advancing existing closed loop, socially and environmentally sustainable alternatives—including astounding developments in farming methods that combines cutting edge sustainable technologies with ancient indigenous approaches to meet all basic and reasonable human needs while at the same time repairing and regenerating damaged ecosystems upon which all life depends?

Whilst climate change is simply the most critically urgent of the crisis we face and related to hot topics such as energy, aged care, health, the media, finance or food. It now feels like all lights are blinding us to reveal a seismic, global socio-political and economic reckoning. It demands our focus now more than ever.

So let’s remind ourselves how very blessed we are to live relatively incredibly comfortably, in a society where we are relatively free to speak freely. And determine to recruit more, and more informed voices. And to help make those voices louder, more clear and direct.

We are here in an arts festival. The angels are sometimes uncomfortable in this frame because they are not spectacle, they are serious activists prepared to risk life and limb to stop bulldozers and wake people up. So please pay attention to these important questions.

Why would our Federal Arts & Communications minister Mitch Fifield repeatedly bypass the ABC’s independent nomination panel to stack our national broadcaster’s board with industry representatives—such as the Chair of the Minerals Council of Australia, Vanessa Guthrie, who has zero experience in journalism, or education or broadcasting? Why do we have Ministers with deep ties to the Institute of Public Affairs, the highly deceptive industry front group that is leading the most aggressive attacks on democratic system including the ABC’s editorial independence—ironically under the banner of freedom of speech? And why is Gina Rhinehart so secretive about bankrolling the Institute of Public Affairs and why does she get a tax deduction for it?

And why has Fifield appointed Rio Tinto’s former Chief Executive, who left hurriedly under a cloud over a widely reported bribery scandal—the international investigation of which is still underway—as The Chair of the Australia Council?* This effectively means that Australia’s career artists are at the mercy of someone who has spent their career in one of the world’s most polluting companies in an industry founded on extracting and exploiting, and notorious for dealing with dictators. And, note that Walsh also sits on the Board of Mitsui & Co, a company with oil, gas and coal operations in Australia and all around the world.

People choosing to stand in the way of efforts to transition to a cleaner, fairer world are dangerous and hiding in plain sight—in powerful positions in our parliaments and in prestigious roles on the Boards of our proud cultural institutions—its intolerable. Meanwhile, we must step up efforts to shut down the market for the vast reserves of coal, oil and gas that is the foundation of their power and wealth. Already more than 7 trillion has been divested from fossil fuels by 988 financial institutions, and counting.

And we’ve never had greater capacities to expose agendas and hold leaders to account.

There are so many brilliant, local grassroots based campaigns doing incredible work using a diverse range of strategic and collaborative tactics. So, if you haven’t connected with one yet, we implore you to. Meanwhile, please follow Climate Guardia on Twitter.

Finally giant wing-fulls of thanks for being with us and most especially to the wonderful director of BOAA, Julie Collins, and the brilliant poets and organisers of Plumwood Mountain’s inspiring Hope for Whole: Poets Speak Up to Adani project in support of the Wangan and Jagalingou Traditional Owners who are fighting to defend their lands from Adani and the Queensland and Commonwealth Governments. Please join us in donating to their Defence of Country Fund.

And we all must do more. That is the message today. More renewable, decentralised power to you!