2015 was a big year for the Climate Guardians, especially with our big adventure in Paris for the international UN climate summit COP21 in November and December. We are still going through all of the memories and images that have been created, but in the meantime here is a highlights compilation!

Climate activist and former president of the Maldives, Mohamed Nasheed has been imprisoned for political reasons and the Climate Guardians were proud to stand with Adam Bandt MP to raise awareness of his plight.

Divestment rally by our friends at Climate Action Moreland and 350.org Australia, where the Climate Guardians stood vigil outside CommBank in Melbourne’s CBD.

One of our founding Arch-Angels, Deborah Hart, launched her book “Guarding Eden” telling the stories of ordinary Australians who have become extraordinary climate activists. It’s available at all good public libraries! http://guardingeden.org.au/

Climate activists celebrated Commonwealth Bank’s decision to cancel its involvement with Adani’s Galilee coal proposals by holding an End of Coal Parade. We also visited NAB, Westpac and received a predictably frosty reception at ANZ, the bank which financed the Whitehaven coal mine and destruction of the Leard Forest.

Beautiful Brisbane #ClimateAngels send a message to The University of Queensland that it’s time to divest from fossil fuels! 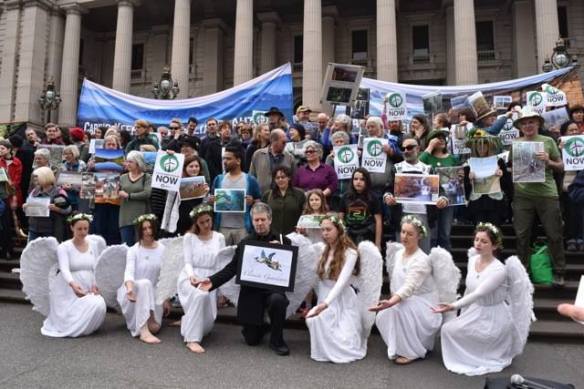 Meanwhile in Melbourne, The Climate Guardians portended at the “Defend The Defenders” rally outside the Federal Government’s punitive inquiry into the charity status of environmental organisations. 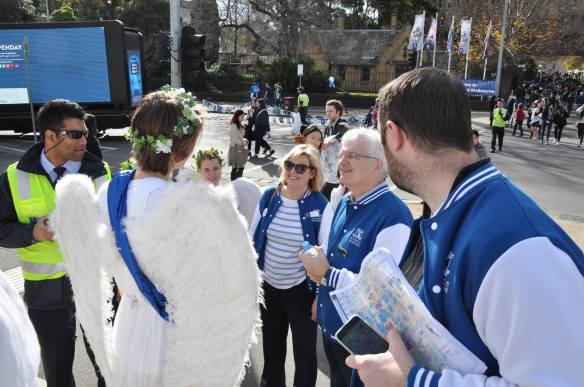 The Climate Guardians put the heat on Vice Chancellor Glyn Davis about divestment at Melbourne University’s Open Day, with help from our friends at Fossil Free Melbourne Uni.

Climate Guardians occupy the rooftop of Environment Minister Greg Hunt for 9 hours protesting the reapproval of the Adani Carmichael megamine.

You can read the statement we released for the Greg Hunt roof action. 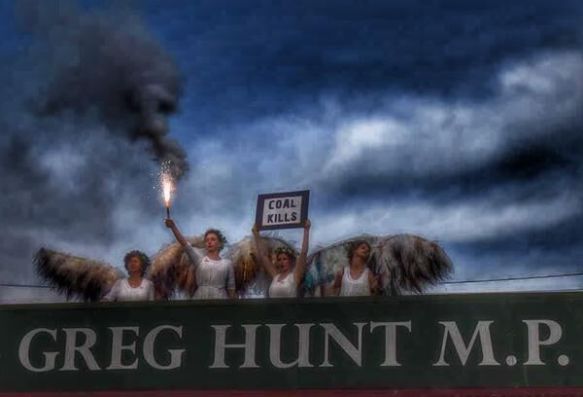 In a spectacular finale, the Climate Guardians launched flares to signal that the showdown with our negligent Environment Minister has only just begun… 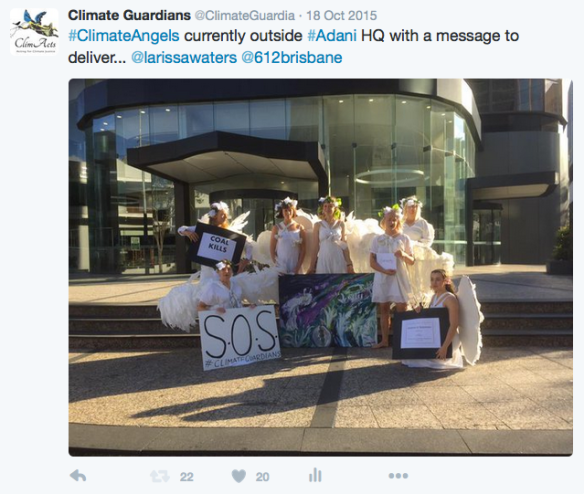 Shortly afterwards our Brisbane #ClimateAngels chapter paid Adani HQ a a visit with their handmade new wings – find out how you can make your own set!

It was an honour for the Climate Guardians to portend at the vigil of Chinchilla farmer George Bender, who lost his life in the fight to save prime agricultural farmland from CSG companies. 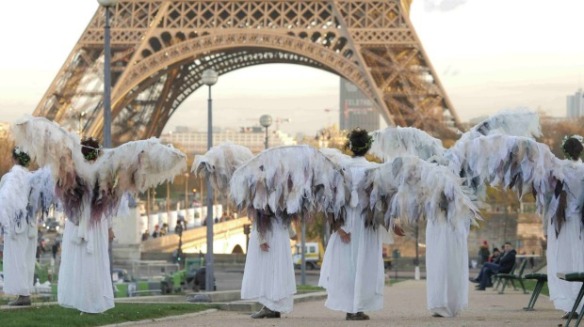 ClimActs lands in Paris for the UN COP21 climate talks. We kicked off our adventures with a front page feature article in The Age… Then we were on the ABC, and then all over the international media! 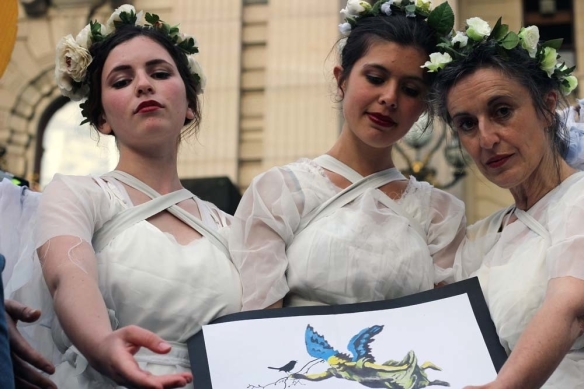 Our Climate Guardian brethren in Melbourne held vigil at the People’s Climate March and were interviewed on Vice. Meanwhile #ClimateAngels were appearing across Australia.

The Climate Guardians portended at La Republique, walking among the shoes of those who could not attend the cancelled People’s Climate March in Paris.

And our friend Van Badham joined us as an angel and stole the show, while taking out a French riot cop with her wings! 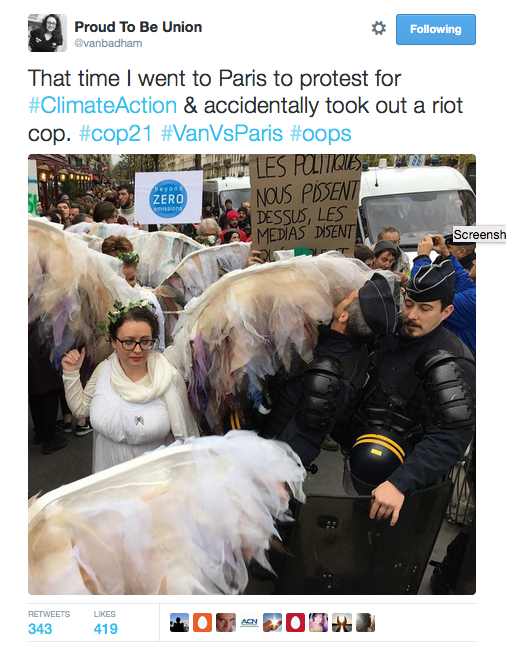 With all eyes on The Climate Guardians in Paris, we handed over the precious letters that we had collected from Australian school children to senator Larissa Waters to deliver to the COP21 climate talks. Forever in admiration of this woman’s commitment to representing the interests of future generations!

Read what Larissa has to say about meeting up with the angels in Paris here. 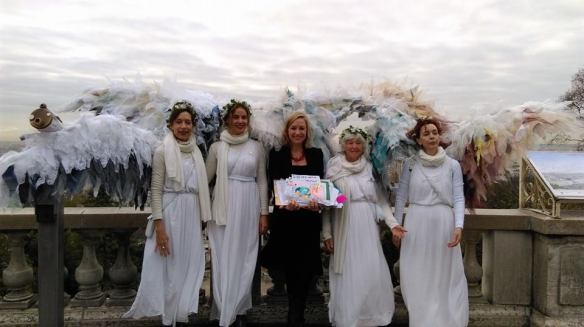 We also went to Le Bourget on the opening day of the UN COP21 climate talks, where we read more letters from Australian school children to delegates as they arrived at the conference centre. 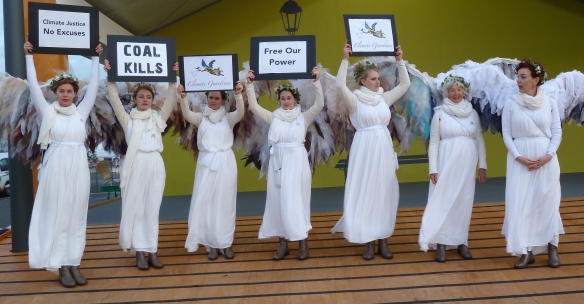 We sincerely hoped that words from the generation most affected by climate change would resonate with the leaders that were making decisions about their future.

It’s not every day that Australian #ClimateAngels have a chance to portend at Le Louvre! It was amazing to be a part of the spectacle created by the Art Not Oil coalition for the Fossil Free Culture protest.

We hope to do more actions with our fellow artivists in 2016 as part of a movement pressuring cultural institutions to divest from fossil fuel sponsorship. 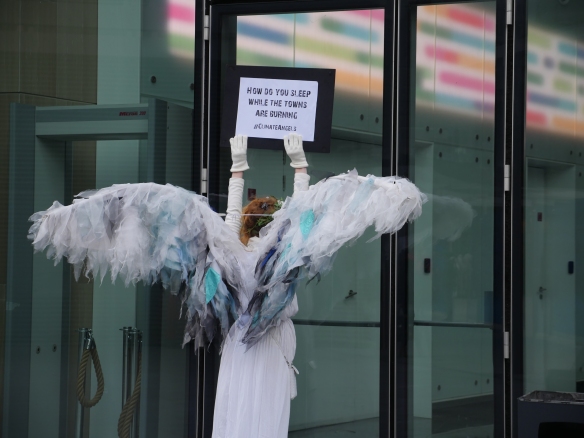 In the dying days of the COP21 conference, #ClimateAngels descended on the corporate headquarters of climate criminal Engie. Days before The Climate Guardians shut down the owner of the heavily polluting Hazelwood coal mine and powerplant, the second inquiry into the Hazelwood mine fire had found Engie culpable for the deaths of residents in Victoria’s Latrobe Valley.

The Climate Guardians delivered the message about the damage done to Morwell directly to Engie, who as part of their greenwashing efforts had sponsored the UN COP21 climate talks.

#ClimateAngels stormed the streets of Paris as part of the December 12 climate protests that marked the end of the official COP21 climate negotiations. The Climate Guardians ended up leading the march to a final sit down on the bridge under the Eiffel Tower as the COP21 agreement was announced. 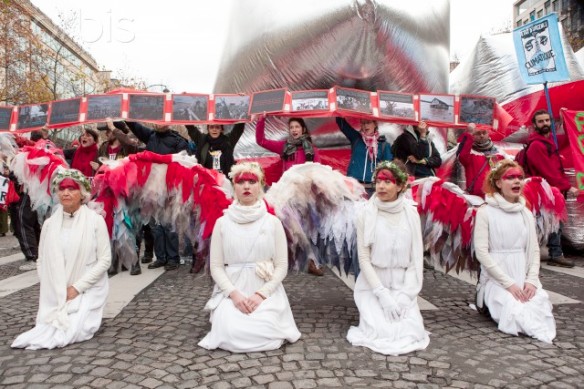