Climate Guardians are thrilled to be performing in Paris as part of ArtCOP21, an exceptional global climate festival connecting hundreds of thousands of people rising to the climate challenge. 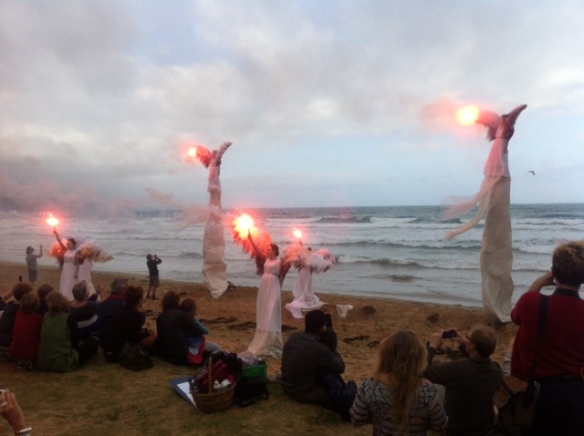 ArtCOP21 hosts an extensive global programme of over 180 major public art installations, exhibitions, concerts, performances, talks, conferences, workshops, family events and film screenings, taking place right around Paris as well as in 22 countries (and counting) around the world. ArtCOP21 events will “highlight the need for governments meeting in Paris to support strong climate action and signal the end of the fossil fuel era – making climate change a people issue, not one to be left solely to the politicians.”

Why such urgency now? Everything we know and love depends on a healthy climate. Yet, for more than two decades of United Nations climate negotiations, fossil fuel corporations and their global financiers have continued to make gargantuan profits while knowingly and carelessly, polluting our world and gravely threatening our collective climate. Meanwhile, they have covertly funded climate denier campaigns to mislead and deceive the public and decision makers in order to continue ‘business as usual’. It is immeasurably unjust that those most responsible for forcing climate change have become the most wealthy and powerful people while those least responsible – underprivileged communities, children and future generations – suffer the most from its effects. Enough is enough.

Graceful, haunting, and iconic, the Climate Guardians performances will both challenge and inspire.

Any donations to support Climate Guardians work will be most appreciated by Angels.