We have planned a special treat for everyone to come along and join us for our fundraiser! Wings of Desire – Help The Climate Guardians Stay Elevated is to help with a stack of expenses that have mounted up over the 2 years we’ve been working on the campaign – costumes (thermals!!), banners, printing, flares, etc, lots of little bits and pieces.

Join us on Friday, 3rd of July, 7pm, for a screening of Wim Wender’s ‘Wings of Desire’.
Tickets are $55 and includes food & film
Longplay Bar, 318 St George’s Road, North Fitzroy

The Climate Guardians had a big year last year, beginning with opening the Lorne Sculpture Biennale with the spectacular performance Coal Requiem

Then later in the year the Climate Guardians (otherwise simply known as the ‘Angels’) made a big splash at last year’s G20 Summit, including being awarded the Most Aussie Moment in the Courier Mail, after negotiating with police to drop them off at the pub after a hard day’s protesting: G20 Brisbane: Our Top 10 Moments

Another highlight of 2014 was being a part of the successful campaign to shut down the Anglesea coal plant and mine, which included a visitation of the site.

More recently the Angels were out there raising awareness about the need for climate justice, this time supporting Climate Action Moreland and 350.org in a divestment action at a Commonwealth Bank branch in Melbourne’s CBD 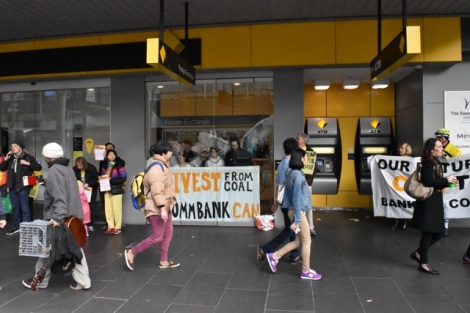 We also used this recent outing to meet and greet with members of the public – Our spectacular wings always get us plenty of attention!

So if you want to help us keep flying high – including a planned visitation to Paris for the international COP21 climate talks in November; make sure you come to our fundraiser!