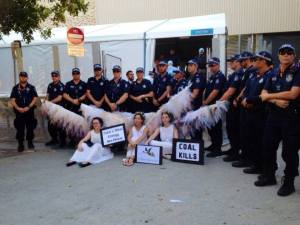 At the G20 in Brisbane (15 Nov 2014) our Prime Minister turned his back on the future by declaring his loyalty to coal. As the world forms a global village of climate actors Tony Abbot stood forth as its idiot. He hosted a forum of world leaders and not only failed to take the opportunity to coordinate a measured and informed response to the threat of climate change, he actively undermined their efforts, and ignored an appeal from Barak Obama to ‘step up’. There are few moments in our nation’s history when we have been so tripped out of step with the world by our own Prime Minister.

This failure of leadership is particularly execrable on an issue of such critical importance. When scientists are warning of the real threat of climate change poses to lives and property, and when those who will bear the costs of inaction are a generation still unable to exercise their democratic agency, this denialism and inaction is beyond breathtaking, it is irresponsible, negligent and no doubt one day will be litigious.

We took part in the People’s March and brought up the rear of the rally. We sank into the Southbank waters to portend the danger of rising seas. We staged a long sit-in at the delegates entrance, demanding to speak to Tony Abbott to demand he reverse his irrational recalcitrance and denial of climate change.

Eventually the very patient Queensland police offered us two air conditioned commodores to the local pub, and what with the Prime Minister leaving the building, we took up their kind offer and a very good time was had by all. Our G20 occupation and the deal brokered with police received mainstream media attention, for which we earned the Courier Mail’s ‘Most Aussie Moment’ award. 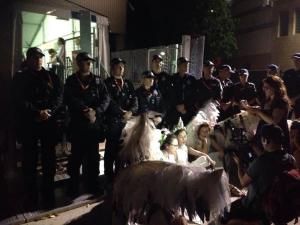